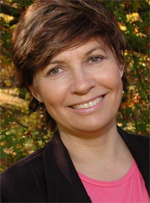 Dr Judith Slocombe's career spans many roles; veterinarian, entrepreneur, business owner, corporate senior executive manager and non-executive director.
A mother of nine children, Judith built a small home based pathology business into the largest veterinary diagnostic group across Australia and New Zealand.
In 2001, she sold her business and was appointed to head up a major diagnostic company with laboratories operating across South East Asia.
Judith has an MBA from the Melbourne Business School (2002), is a Fellow of the AICD and a Fellow of the AIM.  In 2003 she was awarded a Centenary Medal for service to Australian society in business leadership.
In 2005 Judith was appointed CEO of The Alannah and Madeline Foundation whose mission is to keep children safe from violence, with a major focus on cybersafety and reducing bullying and its devastating effects.
Judith holds numerous directorships including Agriculture Victoria Services, Leadership Victoria, and The Young and Well Cooperative Research Centre.  She is a past director of the Australian Red Cross Blood Service, VicHealth, Open Universities Australia, South East Water, and former Chairman of the Lort Smith Animal Hospital.